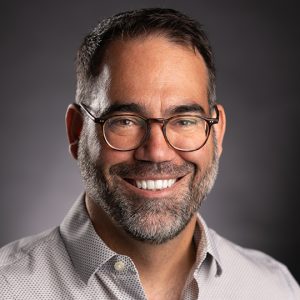 Kyle Cranmer is the David R. Anderson Director of the American Family Insurance Data Science Institute (DSI) at the University of Wisconsin-Madison. Cranmer leads the institute’s charge: advancing discoveries that benefit society through foundational and use-inspired data science research. He is a professor in the Physics Department with affiliate appointments in Computer Sciences and Statistics.

Cranmer arrived at data science through his contributions to the search for the Higgs boson, a fundamental particle that, in the 1960s, had been theorized to exist and is responsible for giving fundamental particles in the universe their mass. Finding evidence for the particle required navigating enormous amounts of data generated by quadrillions of high-energy particle collisions. Cranmer developed a method for collaborative statistical modeling that allowed thousands of scientists to work together to seek, and eventually find, in 2012, strong evidence for the Higgs boson.

After making this discovery, Cranmer pivoted to thinking more broadly about data science and machine learning for the physical sciences, identifying synergies and opportunities, and shaping this discussion internationally. His research has expanded beyond particle physics and is influencing astrophysics, cosmology, computational neuroscience, evolutionary biology, and other fields.

One of Cranmer’s goals for the DSI is to broaden engagement in data science across the UW-Madison campus. Drawing on his own experiences reaching across traditional academic boundaries, he aims to build partnerships between people working on data science methodology and those working in the natural, physical, and social sciences and the humanities. Understanding and addressing the impact data science has on society, and the disproportionate effects it can have on marginalized people, is central to his vision for this work.

Cranmer views the Wisconsin Idea as integral to the mission and role of the DSI. He seeks opportunities to engage with the community in research, such as working with UW-Extension and farmers on problems like agricultural sustainability, carbon capture and climate change. Cranmer serves on the advisory board for the UniverCity Alliance. He stresses the importance of building trust, both within and outside the university, by demonstrating the potential for data science to positively affect people’s lives and the world.

Prior to starting his work at the DSI in July 2022, Cranmer was a professor of physics at New York University for 15 years and the executive director of the Moore-Sloan Data Science Environment, where he worked to understand the institutional changes necessary to establish data science in academia. He is an alumnus of the UW-Madison Department of Physics; after earning his Ph.D. here, he was a fellow at Brookhaven National Lab. He was awarded the Presidential Early Career Award for Science and Engineering in 2007 and the National Science Foundation’s Career Award in 2009. Cranmer was elected as a fellow of the American Physical Society in 2021, and he was selected as Editor in Chief of the journal Machine Learning: Science and Technology in 2022. He grew up in Arkansas and was in the first graduating class of a public, residential high school for math, science, and the arts.