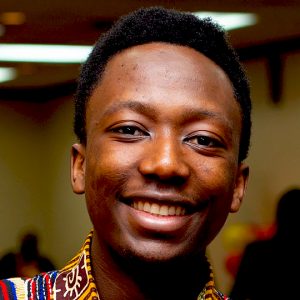 As a high school student in Ghana, Sheriff Issaka had extremely limited access to computers but was intrigued by their power. He is one of six students globally awarded a scholarship by the King-Morgridge Scholars program at UW-Madison for their “drive, academic success, and commitment to addressing problems of poverty.”

Sheriff works with Dr. Reginold Royston in the iSchool to evaluate how artificial intelligence, or AI, impacts people. Through this work, it became evident to Sheriff that the people most negatively impacted by AI are those least represented at the table when AI applications are developed.

During his junior year, Sheriff started AI4Afrika, which is a group of students at UW-Madison and in Ghana working to create AI technologies that are responsible, equitable, and accessible. One of these technologies is machine translation for African languages. While there are more than 2,000 languages spoken on the African continent, fewer than fifteen are recognized by current technologies. The students are also working on a conversational chatbot that will provide anonymous answers to questions about subjects such as menstruation and mental health that are considered taboo in many parts of Africa. Sheriff hopes that efforts like AI4Afrika will help students in CDIS graduate with a better understanding of how the tech they create will affect human society.

“Data science cannot achieve the level of societal contribution that we all envision if we don’t take active and bold steps toward that direction.”